In this tutorial you will learn how to write aggregation queries and learn about the window concept in Odysseus.

We will use the same setting as in Simple Query Processing. So you should follow steps 1-4.

Odysseus provides a wide range of aggregation operators. In this tutorial we will focus on the typical aggreations average (AVG), count (COUNT), sum (SUM), minimum (MIN) and maximum (MAX).

Crate a new Odysseus Script file with the PQL template an name it aggregation1. Change #RUNQUERY to #ADDQUERY. By this, the query will only be installed an not started, so its easier to see what happens.

Here you can see the aggreation operator that connects to source nexmark:bid. The aggregate functions are defined by the aggregations parameter. In this example you can see four entries. The first entry defines the aggreagte function, COUNT in this case. The second entry, the attribute can should be used for the aggregation. For COUNT is does not matter, which attribute of the input element should be treated, but one attribute must be given, so be choose price. The third parameter defines the name of the output attribute, i.e. what is the new name for the output and finally, the last parameter determines the output data type. This parameter is optional.

Now execute the script, and show the result stream (e.g. as a table). Now start the query (e.g. with the selection of the Start Query Button).

Here you can see 15 bids that have entered the system.

Replace the input with the following:

The results of the query should look somehow like the following:

Now its time to highlight the Metadata part a little more.

If you look at the values, you can see that they are not overlapping. This should be rather clear, because the count e.g. can not be 1 and 2 at the same time. The metadata show, that every 500 (in this case milliseconds) a new bid is send to the system and a new aggregation is build.

Another important think to note is, that a new aggregation will be calculated, when a new event arrives a the system. For this example it take 8 seconds before the first value is created. For streams with a low data rate the AssureHeartbeat operator can be used to produce values on a regular base.

There is also the possibility to define groups (as in SQL group by). The below in Element Based Windows for an example.

In the example above you can see that the aggregated values always contain the information of all previous events.Typically, the older the event is, the less interesting is it. An auction system provider may not only be interested in the alltime highest bit, but e.g. the highest bit for a specific time (e.g. the last 24 hours) or related to a number of bit that have been posed.

For this, Odysseus allows to define windows. A window defines a subset of elements that should be treated together, e.g. should be aggregated.These subset can overlap (so called sliding windows) or be disjunct (tumbling windows).

The following picture shows such a window. In this case 6 elements are in the window.

The time based window allows to define windows based on the time.

Create a new PQL script and name it timewindow1:

In this example we define a time based window over the bid source with a size of 10000, here 10 seconds.

If you run the query and look at the results you will see something like this:

If you look at the metadata you can see that each element has a time interval ranging from it start timestamp to a future time that lies 10000 ahead, e.g. 7500 to 17500, 8000 to 18000 and so on. The meaning of the time is, that elements that are valid at the same time should be treated together. If you look e.g. at time 10000 there are 6 events which time interval contains this value. The seventh element (with start time stamp 10500) is part of another window.

We can now combine the window with the aggregation.

Create a new PQL query (window_aggregation1) with the following input:

If you run the query the result should look like this: 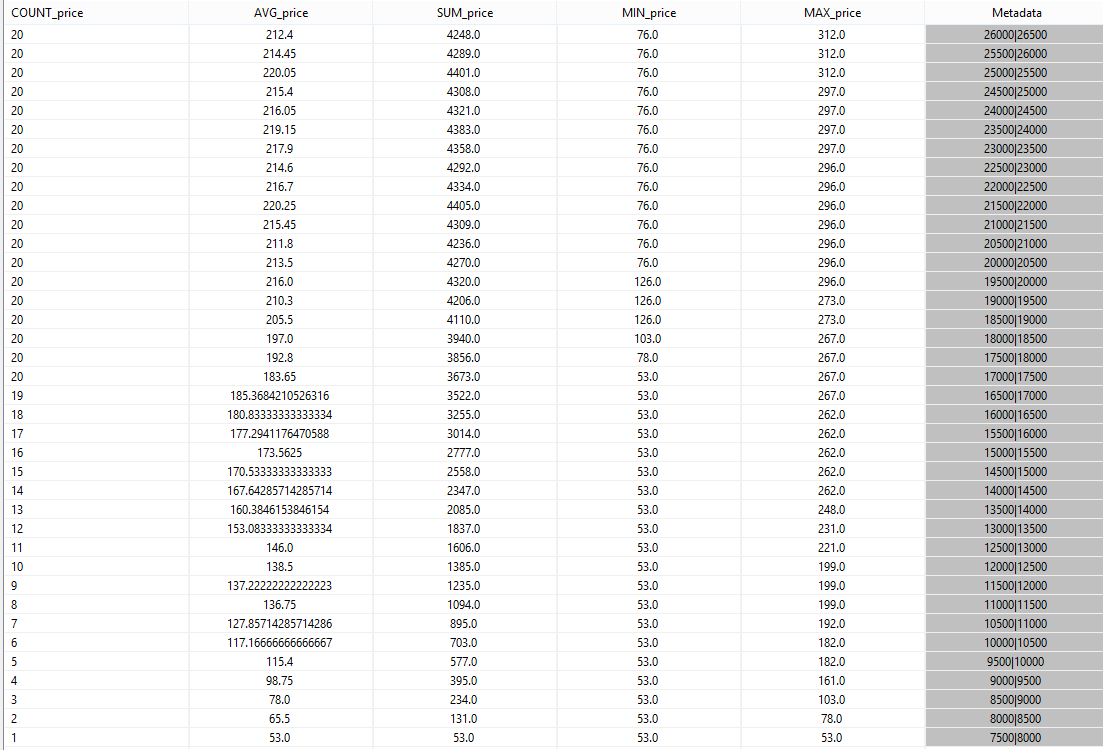 You can see, that the count attribute is counted up to 20. This mean that in this case 10000 (here 10 seconds) contains 20 events. If you look at the result of the above window query, you can see that the first and the twentieth element have an overlapping time stamp, and the 21th element not. So the new window only treats element 2 to 21.

The window we defined is called a sliding window. The query delivers the aggregations about the bids that were posed in the last 10 seconds.

Sometimes, the result should not be in a sliding way. E.g. if a provider wants to know how many bids are posed in 10 second intervals. If the size is 10 seconds, this is called a tumbling window.

A tumbling window can be defined with one of the two parameters: ADVANCE or SLIDE. The difference is how the start time stamp of the elements in the window are treated. Let us start with ADVANCE.

Create a new PQL script timewindow2.qry as in the following: 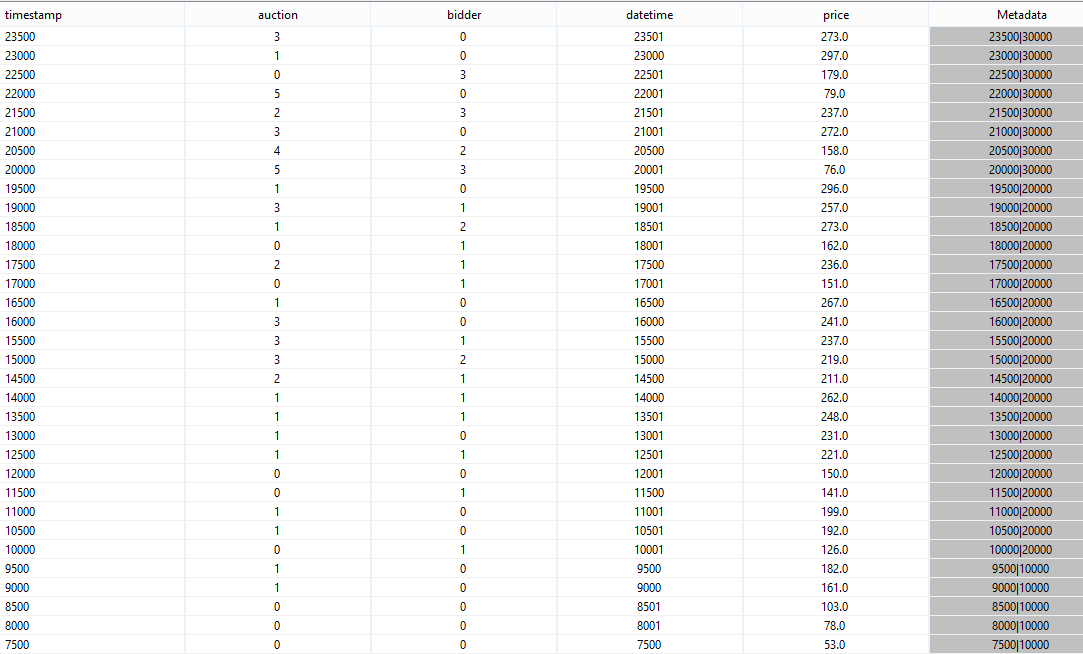 If you run the following aggregation query (window_aggregation2)

you will see the following output (when no other query is running!): 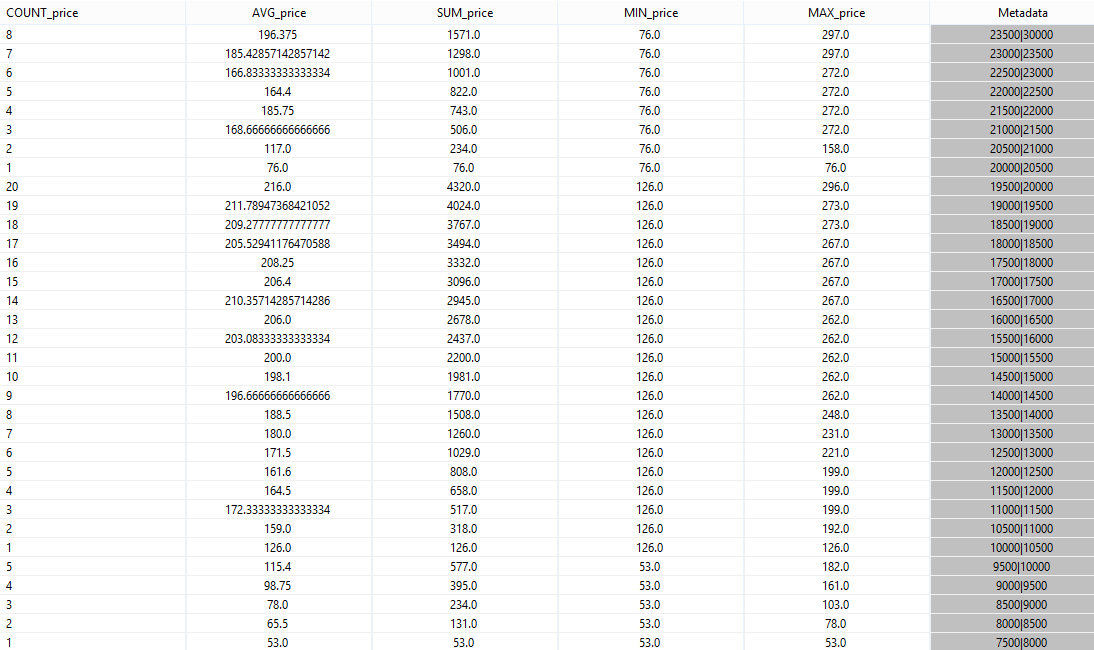 As you can see, the aggregations count up to 20 and then start again at 1. This is not exactly, what the provider wanted. The problem here is, that the elments have different start time stamps and only those parts of the elements are aggregated where the time intervals overlap.

A way to cope with this is to use another parameter called SLIDE. With slide all start timestamp are set to the same value. This can be interpreted as reducing the granularity of the time domain.

So remove all queries. A start a new PQL query (timewindow3)

After starting this query, you should see something like: 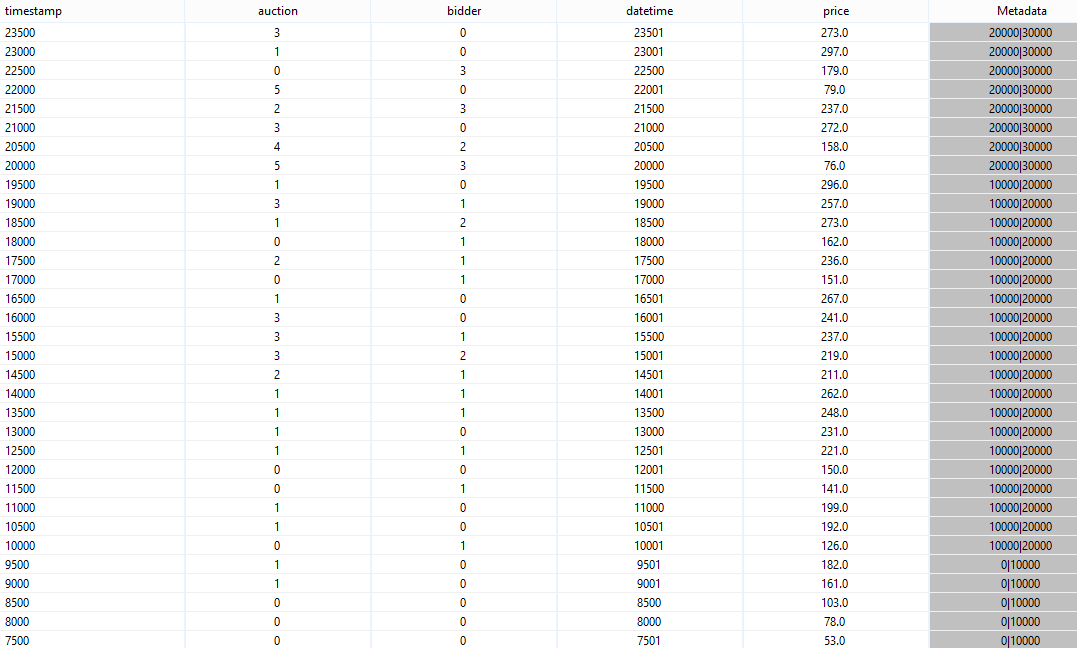 Now you can see, that for one window all time intervals are the same.

If we now run the following query (window_aggregation3):

You will get the following output:

Note: You could ignore the first line, it was created because when the query was stopped.

Here you can see the aggregation over 10 second intervals.

Another way to define a window, is based on elements, e.g. the last 10 elements received. In Odysseus, the element based window is implemented with timestamps, too.

Here you can sse the operator ELEMENTWINDOW with the parameter SIZE, that defines a window containing 10 elements.

If you start the query, you will see: 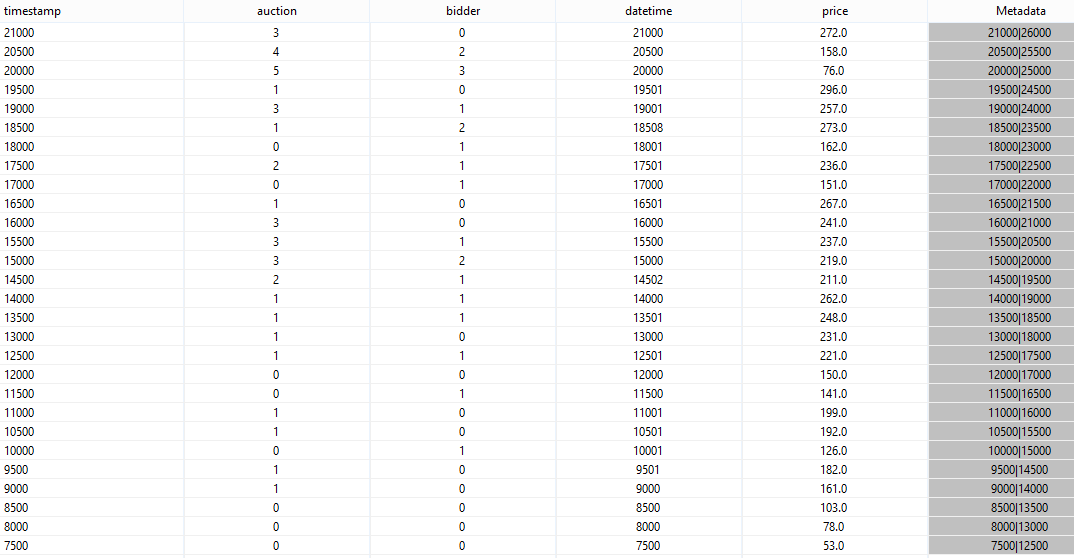 In the same way, ADVANCE and SLIDE are used in the time based windows, these parameters can be used here.

Note: If the stream has a low data rate, it may take very long before the first elements are created!

The most generic way to define windows