Nexmark simulates an online auction setting and was originally designed as an benchmark for the Niagara streaming system (see http://datalab.cs.pdx.edu/niagara/NEXMark/). 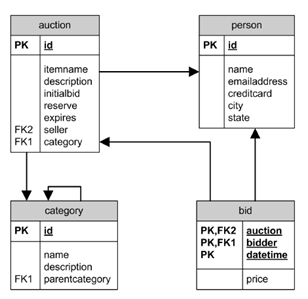 In this scenario there are three streams Person, Auction and Bid and stored information (Category). At every time, new users can register themself in the system and create new auctions. Each user can also generate bids for auction. The Schema can be found in the picture above.

We adapted this scenario for Odysseus and allow to configure the scenario.

Get and Start Nexmark Generator

We recommend using the docker version. Here all depedencies are already provided inside the docker-image

You could download nexmark from dockerhub (for windows and macos you could use the Docker Desktop):

Remark: If you want to configure in docker environments you could use the example files from: https://odysseus.informatik.uni-oldenburg.de/download/nexmark/config/. Only the file named NEXMarkGeneratorConfiguration.properties will be used. So change the name or adapt the file if you want to use the SLOW version.

Now Odysseus can use the nexmark sources. Each time an Odysseus query connects to one of the servers a new scenario is started, i.e. the same users and the same auctions are generated, so the same queries will always create the same results.The created events are consistent, e.g. there will be no bid for an auction that has not been created.

Go to http://odysseus.informatik.uni-oldenburg.de/download/nexmark/ and download a version that fits to your operatoring system (e.g. nexmark.win32.win32.x86_64.zip for a 64bit Windows).

Unzip the archive and start the "nexmark.exe" within the nexmark folder. This should look like in the following:

Remark: Especially, if there are multiple JDK installed, you could get an error like "No exit data available" and Nexmark does not start. This is typically because the wrong JDK is bound. In this case you could open the nexmark.ini File and add two lines bevore -vmargs (Change path to your jvm.dll location for Java 11)

The following parameters can be adapted:

When using docker, you will need to bind a volume with -v (see example above)

In the following code block is an example of a nexmark configuration (/config/NEXMarkGeneratorConfiguration_SLOW.properties). All time elements are in milliseconds.

The following elements can be used: