Typically, you will create an operator in an existing bundle. If you start with a new project from the scratch, you will need to create a new bundle.

To create an operator in your own bundle you need to add some dependencies to your Manifest.MF.

Open the MANIFEST.MF of your bundle and add the following dependencies: 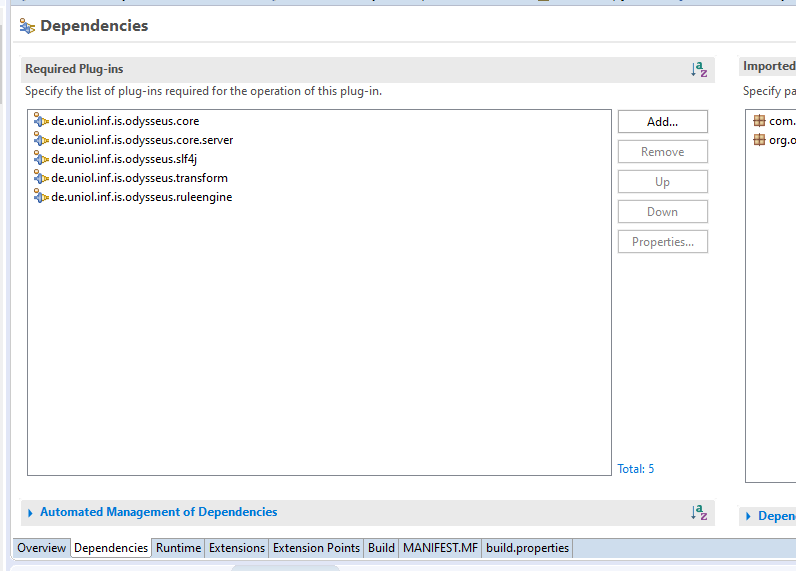 To create a new operator from scratch, the following steps have to be followed:

Remark: This example adds an operator to an existing bundle. See Add a new Bundle and Feature if a new bundles should be created.

Important: See below if the output schema of the operator is different than the input schema.

In the following we will use the route operator to demonstrate how easy the integration of new operators in Odysseus is. The route operator is a more general form of the selection operator. It needs a number of predicates. If the first predicate evaluates on the incoming data to true, the input will be send to first output (port 0), if the seconds evaluates to true to the seconds output and finally, if no predicate evaluates to true to the last output port.

First, you need to decide if you want to place the operator in a new OSGi bundle or in an existing one. Independently of that, the operator must be placed in a package ending with logicaloperator if it should be integrated automatically.
To create your own logical operator you need to extend AbstractLogicalOperator (which implements ILogicalOperator). For convenience reasons there are base implementations for operators with single input (UnaryLogicalOp) and binary input (BinaryLogicalOp). As a naming convention, the class name should end with AO (for algebra operator).
This class must provide (at least) two constructors and the clone method. The default constructor is required as instances of logical operators are created by newInstance(). Clone must call the copy constructor and the copy constructor must call the super copy constructor! If at runtime an error like "has no owner" is called, in most cases this is because of the missing call to the super copy constructor.
Finally, the class needs setters and getters for the parameter it should keep

Step 1b: Annotating the logical operator

For the easy integration of new logical operators into to PQL query language, annotations should be used. Another way is to extend AbstractOperatorBuilder. In these annotations the name of the operator and number of minimal and maximal inputs and the parameters are described. In addition, the annotations may include some documentation and a URL for further information about the operator. These information are also available in the Odysseus Studio GUI.
On the right side, the whole implementation of the RouteAO can be found. Because predicates need to be initialized before the processing, they should be saved by the AbstractLogicalOperator.
Further information about the annotations can be found in the PQL documentation.

For many operators the input schema and the output schema are the same but often you need to create you own output schema. For this, overwrite the method getInputSchemaInternal(port).

If you just want to merge the input from the left and the right, you just can use the method as in the following (from EnrichAO)

If you want to add new Attributes, it is important that you create a new schema based on the input one (because there are many hidden stream descriptions inside the schema). In the following there is an example for this

You can also create a totally new schema, e.g. if your operator creates a different output from the input. Here is an example for this:

Until now, only descriptive information about the new operator is given. Next the concrete implementation of its functionality needs to be provided.
To create an own physical operator, AbstractPipe<R,W> needs to be extended. To allow generic implementations we utilize the Java generics approach. R is the type of the objects that are read by the operator and W is the type of the objects that are written. Although in most cases, this will be the same class (e.g. Tuple) some operators may read other objects than they write.
The following methods need to be overwritten:

Important: For operators with more than one input the processing must be synchronized. Especially, process_next and processPunctuation!

If necessary: process_open, process_close. These methods are called when the query is initialized and terminated, respectively.

As a naming convention the class name should end with PO (physical operator).

Important: If you create a new StreamObject at runtime you must copy the cloned metadata!

Rewriting is used to switch, add, remove or replace logical operators before they are transformed into their physical counterparts. Normally, the aim of the rewriting process is to optimize the query, for example, by pushing down selection operator before costly joins. The implementation is done by rewriting rules, which are implemented like transformation rules (see next section).