PingMap is a view in OdysseusNet and is a part of the OdysseusNet Perspective. It shows the latencies between each known OdysseusNode in a 2-dimensional space (aka ping). 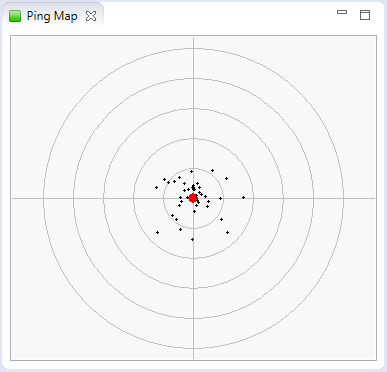 Each black point in this space represents one OdysseusNode. By moving the cursor above one point, the name of the corresponding node is displayed. The euclidean distance between two points is the (estimated) latency between these two OdysseusNodes. The red point in the center represents the own node. Circles around it mark specific latency values beginning with 10 milliseconds, then 20 ms, etc. The view updates when the latency of one or more nodes changes. The NodeView shows the exact latency numbers.