1. Get and Start Nexmark Generator

Next, open Odysseus. If you don't have Odysseus installed yet, have a look here: How to install new features.

Important: As CQL is no longer part of the core system you must install the CQL Feature.

Now, you need a description that tolds Odysseus how to connect to the nexmark server. This is down by a Odysseus Script within a Odysseus Project. You can download this project from

In Odysseus go to the "Project Explorer" and open "Import.." from the context menu (right click with your mouse). 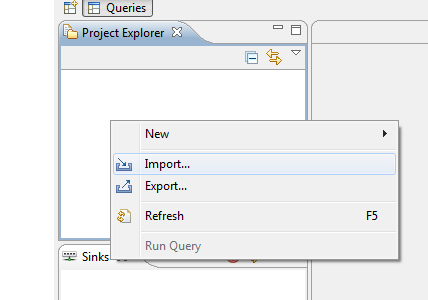 Choose "Existing Project into Workspace" from the  "General" folder and click on "Next". Choose "Select archive file" and "Browse..." for the downloaded "NexmarkProject.zip" in your filesystem. You should see "Nexmark" in the "Projects:" field like here: 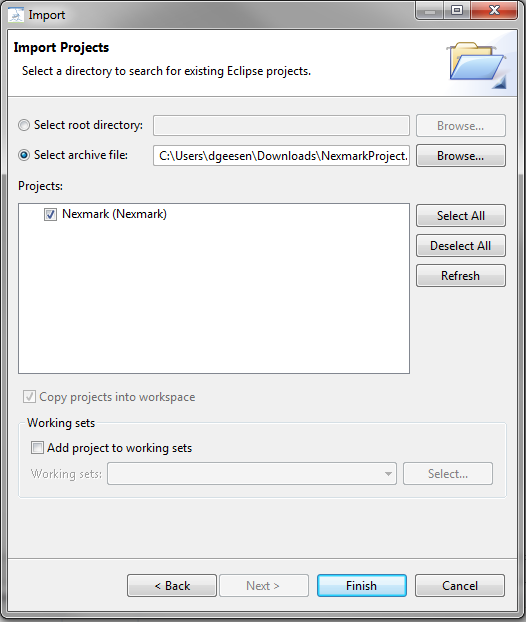 Press "Finish". Now you should see the Project "Nexmark" and two query-files in the "Project Explorer" 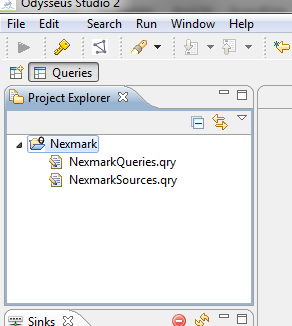 Open the file "NexmarkSource.qry". You should see an Odysseus Script in your editor:

To run this script, press "Run Query" from the toolbar (or from the context menu, or by CTRL-R):

Now you should see the four sources in the "Sources" view: 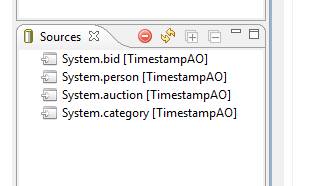 Now you can use the sources, even for your own queries.

Remark: If you get an exception you should test, if the nexmark server up and running (Getting Started with Nexmark)

If you want to run the nexmark server on another computer you simply have to change the ip adress in NexmarkSources.qry.

There are also some example queries that are provided by the NexmarkQueries file.You can open and run this file too. Then, you should see 6 queries in the query view.

You can also see that the status is inactive. Therefore, the queries are not started yet. To start them all, you can select all queries in the query view and hit the "Start Query" command from the context menu: 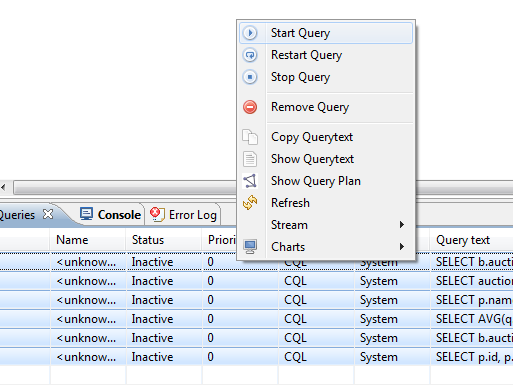 Now the queries run and their status should be "Running".

If you may have a look at the data, you can choose a query and open the context menu. Now you can open a table (within the "Stream" sub-menu) that prints all outgoing tuples of the choosen query into a table. Similar to this, you can use a chart (witin the "Charts" sub-menu) to draw diagramms. This could look like the following: 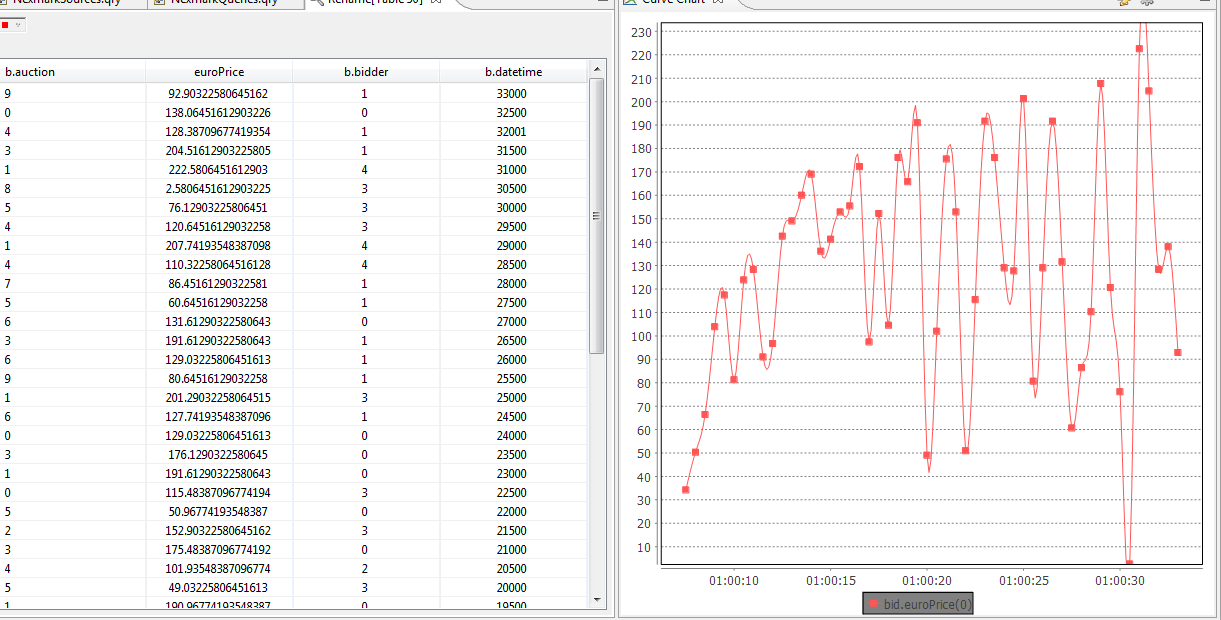 You can also have a look at the query plan to investigate the running operators by hiting the "Active graph" command: 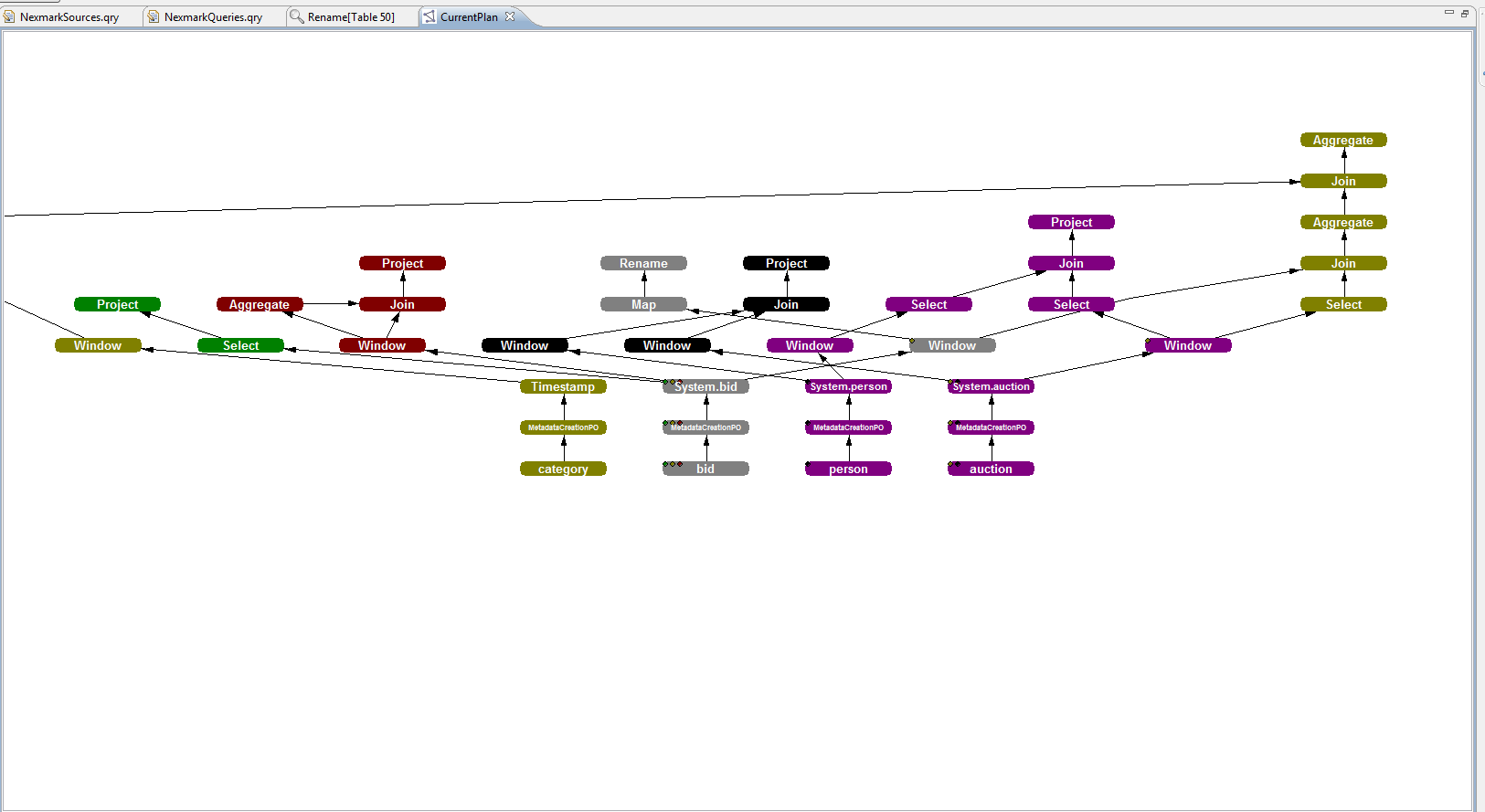 That's all. Now you can, for example, express your own queries using Odysseus Script

See this tutorials for some examples projects explaning Odysseus.